Tonnes of dead fish have washed up on the shores of a large saltwater lagoon in south-east Spain in recent days after a mass die-off that has shocked local residents and environmentalists.
The local government has blamed recent hot weather for the deaths of the fish in the Mar Menor, south of Murcia.
But scientists say pollution from local farming has degraded the water quality.
Prosecutors are investigating and residents have held protests to demand action.
Reports in the Spanish media say the central government is considering a request to declare the Mar Menor a disaster area.
The request was sent by the regional government, which has come under increasing pressure to save a lagoon that has been plagued by ecological problems for years. 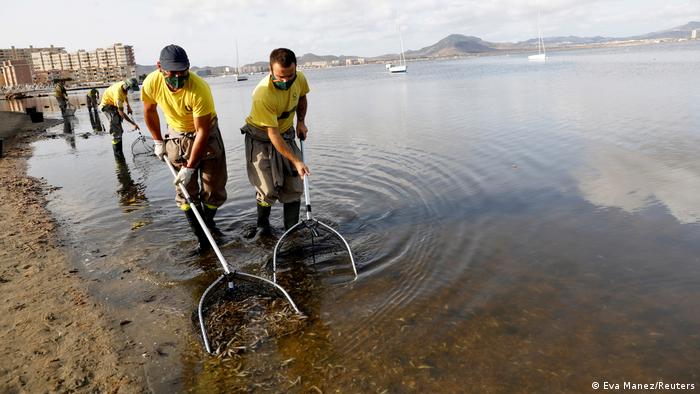 Located on Spain’s south-eastern Mediterranean coast, the lagoon was once a magnet for tourism and a sanctuary for marine life.
But the condition of the water has worsened in recent years, leading to the degradation of ecosystems and mass die-offs of fish in 2016 and 2019.
WWF España, an environmental group, said the principal cause of the latest fish deaths was “pollution from intensive agriculture in the area”.
The group attributed the high mortality to a lack of oxygen in the water.
Ecologists say algae can bloom in waters that have been polluted with high levels of chemicals from human activity. This overgrowth of algae blocks sunlight and reduces oxygen in the water, making it difficult for aquatic life to survive.
“People call it the green soup,” Ramon Pagan of a local environmental pressure group told Reuters news agency. “It’s caused by an excess of fertilisers in the water.”

One resident, Ana Pineda, said locals had been demonstrating about this for years.
“We’ve been unable to set foot in the water or be on the beach for years,” she said.